skip to main | skip to sidebar

The Calm Before the Storm...

Well, Adam and I are taking a much deserved break this weekend. After a week of little, silly campers, super hot gyms, research papers, and day to day craziness, I think we have definitely earned a relaxed weekend.

Right now, Adam is actually playing a college football game on PS3 and I am watching him and his buddy focus so intently on playing the video game. Haha. This weekend will be fairly relaxed for the two of us. Adam plans to work on his research paper(s) and I need to plan for next week's Silly Sports Camp and volleyball "open gym" practice. Monday through Friday of next week, I will have about 20, 9-11 year old "Silly Sports" campers. Also, because of the heat index during our afternoon volleyball practice time, next week we will practice in the early hours (like, 5:45am.). That is early! But, I love being in the gym with the girls, so I'll take any time I can get.

(By the way, Adam just scored!! Whoo-hoo! So, He's finally on the board, although losing 28-7. Not bad for his first time, in a long time, playing the video game.)

Back to our upcoming week...Dad and Nonee are planning to visit, too. I'm looking forward to sharing our new home (Starkville & MSU, not a new house). Then, next Saturday, I will be doing my second triathlon! This one is still considered a "sprint" triathlon, as the distances are significantly shorter than traditional/olympic level competitions. The "Race of Grace" is 400m swimming, 18 mile bike, and 5K run. I am definitely looking forward to the challenge.
Posted by Mississippi Love at 7:27 PM No comments:

Today was the first (of three) days for our littlest campers, ages 3-6 years!  We have a little under 20 campers running around, bouncing colorful bouncy balls, playing games, and just being cute and silly.  Luckily, I have a great staff of camp coaches and counselors to help minimize the chaos.
Here is today's cute camper quote, "I know why your parents named you Coach Love.  It's because you are so sweet!"  -5 year old camper  (Of course, one of the camp coaches next to me began laughing as soon as she said this..haha).
Posted by Mississippi Love at 8:05 PM No comments:

Well, Adam and I had a great weekend...after a super fun, but super exhausting week!  Last week was the first week of "Silly Sports" Camp!  We had a little under 40 campers, grades 1st-3rd!  Fortunately, I had amazing Camp Coaches and Counselors!  They did a great job will all the craziness that is to be expected with summer camp and then some (which is expected because the name of the camp includes the word, "SILLY!").
In addition to kids' camps, I am getting to be in the gym with the volleyball girls.  They are working so hard!  And, they don't even HAVE to be there!  Everyday, I see each student-athlete show signs of improvement.
Ok, now...about this past weekend!  Saturday morning, Adam and I rode our bikes (Yes, Adam has a bike now, thanks to our neighbors who were looking for someone to dump the broken thing off on.  Fortunately, we were able to get the gears working again and now Adam and I can ride together!  Naturally, the free bike is a little louder and squeakier than mine, but, hey, it's a bike!) to Sanderson rec center to participate in a local fundraising 5K.  The 5K supported research and awareness of ovarian cancer and honors a local woman who lost her battle with the disease in 2006, Kim C. Gee.  The ceremony was very touching and sweet.  And, after the balloons were released in honor of those affected by ovarian cancer, the rains came.  And it was no joke!!  So, the race was moved indoors and we ran on the track inside Sanderson...25 laps.  And, you know what...it was pretty fun.  There was music and everyone was running together...closely.
Later Saturday night I played in a pick-up, sand volleyball tournament.  And we won!  Our total earnings...$7!  Haha!  Still, I enjoyed my team and meeting new people that enjoy the sand.  (Although, it was pretty soaked after the big rain storm earlier in the day).
Sunday, Adam and I enjoyed breakfast with our neighbors and their three year old.  He is a Thomas the Train expert.  I now know all the trains and all about trains, at least magic trains, that is.  Our breakfast lasted from 8:30 to 12:30, and it would have lasted even longer had we not all lost our sugar highs and crashed from our super huge waffle breakfast.
After a nap, Adam and I headed out to one of the well-known subdivisions in town and attended three open houses.  We are not in the market for a house, exactly, but we did enjoy just seeing what Starkville has to offer.  It was a very interesting afternoon filled with HGTV-esq comments from us and the different real estate agents.  We saw things we liked and features we didn't like.  And, we both came away thankful that we have a great place to rent, at least for the next year!
Posted by Mississippi Love at 6:57 PM No comments:

Heading to Destin for the weekend!!

Tomorrow morning, Adam and I are heading to Destin, Florida for a big volleyball tournament.  The tourney is sponsored by Fudpuckers and it is a HUGE tourney.  I have been wanting to play in it for the past several years but never able to make it down.  So, I am beyond nervous and super excited!!
The sand tourney is a 4-player format.  My team consists of my friends from Knoxville, Scott, Bobo, & Misty.  All three of them have played in this tourney a number of times before, (actually, they've won it a time or two, too.  Um, but no pressure on the newbee...haha).   We're playing in the Men's A Division.
We are staying at a hotel where supposedly we just walk right out the doors onto the beach where the courts are set up for the tourneyment.  Actually, I think we will know a few people down there...people from Starkville and Knoxville.  I guess players from all over the South head down for the event.  The whole thing started earlier this week...so, I am anxious to get down to where all the action is!!
Posted by Mississippi Love at 4:41 PM No comments:

Well, we've been busy for the past few months...but enjoying it all!
The past few weeks have been a little crazy.  Adam was out of town over the weekend attending (and presenting) the Collegiate Sports Research Institute Conference at UNC Chapel Hill.  While he was working hard, I was having too much fun here, at home.
MSU was having its big Super Bulldog Weekend and Starkville was having the Cotton District Arts Festival, too.  It was a happening weekend!  Saturday morning, I was up early to volunteer (not run) the Cotton District 5K road race.  After my duties were finished and I had collected all the cards from the runners as they headed my way after the finish line, I followed the dog parade to one of the stages for the awards for both the race and the dog parade.  I had two friends win in their age divisions for the race and my friends' (a couple I know from aerobic class on campus) dog won an award for the oldest dog in the parade (14 years).  Actually, they had great odds to win an award...they walked all seven of their dogs in the parade!!
After that, I cruised around the Cotton District Arts Festival and checked out all the artists' booths set up all over the closed off streets.  Later that morning, my swing class was performing, so I was pretty nervous but excited.  It had been trying to rain all morning, but held off for the race and actually for day.  But, when it came time (11:30am) for my swing class to perform, the sun came out and it was blazin!  There were only five of us there, so it was an aerobic display of sweaty swing dancers tearin' it up on that parking lot!  It was so much fun; we all had a great time dancing.  (Although, I really missed my partner).
After dancing (but, still in full sweating mode) a friend and I wandered around the festival some more...I had already scoped out the layout, so I was ready to share all the cool booths I found with Nicole.  (Nicole is Alan's wife...Alan is Adam's colleague.  Adam and Alan were both at the conference at UNC, so Nicole and I spent the day together).
Around 2pm, we headed over to the MSU baseball game (part of Super Bulldog Weekend) and meet up with some of Adam & Alan's colleagues in what is called the "Left Field Lounge."  Let me just tell you this place is the ultimate tailgating party...because you are tailgaiting AND watching the game!!!!  I can't even explain it.  Anyway, we made a friend who's set up was right behind the left field out-of-bounds post and we were set for the rest of the ball game.  We even got some peanuts, Cokes, and a steak out of it!!  I'm telling you...it is like nothing else out there in the Left Field Lounge.  MSU won the game on a homerun in the 10th inning, so that was awesome.  And, it started to rain just as the game was over.
We then walked to the Maroon and White football scrimmage, but we were only able to stay for the first quarter...I was exhausted and so was Nicole.  Anyway, I think we did a pretty good job of supporting our school and city for one day!
Unfortunately, I don't have any pictures from the day because I found the camera the day AFTER all this happened...it was in a jacket pocket...whoops.
Posted by Mississippi Love at 8:02 PM No comments:

Whole lotta dogs!!! (Can you find four dogs in this picture???) 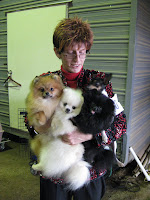 Tough day at the office.... 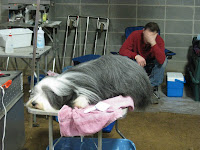 This is Bulldozer, a Bouviers des Flandres.  He is HUGE! 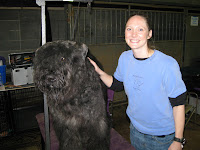 This is Wendy (Dozer's Mom) and her owner.  When I was getting ready to take Wendy's picture, her owner stopped me and said, "Excuse me, give me your camera."  I was totally shocked, thinking that I was not allowed to take pictures of the dogs.  Well, it turns out, he just wanted me to be in the picture with Wendy!  So, Adam took the picture of the the three of us.  As you can see, I am still a little wide-eyed from the initial shock!  Haha!! 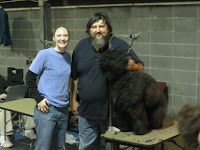 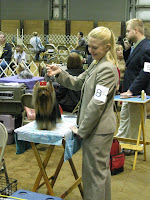 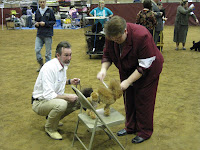 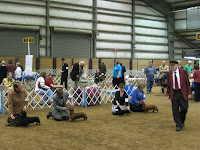 A little last minute grooming.
Four little Dachshunds all in a row.
Posted by Mississippi Love at 8:58 AM No comments: 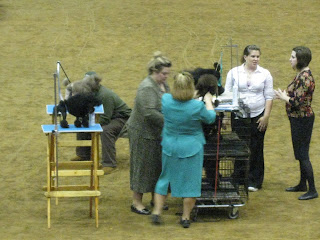 A few weekends ago, (Jan. 10) Adam and I attended a legit/national recognized Dog Show here in Starkville!  We were totally in the midst of "Best in Show" and then some.  The Show was held at the Horse Park, which was a great venue.  There was lots of seating looking down to the "showroom floor" (which was all dirt, divided by mini white fences, and dividers to seperate the grooming area from the showing and viewing area.  But, we actually spent the whole time walking around on the dirt floor watching the individual competitions, crusing the grooming area seeing all kinds of dogs we'd only seen on television, and giggling at all the silly merchandise they had for sale, (i.e. rhinestone collars, "paw"nail polish, clothing/outfits from polo sirts with sweater vests to tutus.
I took a few pictures of all the fun.
Posted by Mississippi Love at 8:39 AM No comments: